The Spanish ESCO market is still considered to be small, nevertheless, it has been increasing steadily both in the public sector, mainly with local and autonomies authorities, and in the private sector. A growing interest has been experienced from potential clients driven mainly by market factors (growing energy prices) and consolidation of the financial crisis, but also via governmental promotion and programs. ESCO projects have been focused primarily on public lighting and public buildings, with some attention on private non-residential buildings and industries involving cogeneration, audits and HVAC control systems.

A success history of an ESCO Project in Andalusia is the case of the town of El Saucejo (4,500 inh. aprox.). Public lighting facilities in the municipality were in poor condition; with obsolete equipment, which resulted in high energy costs and bad lighting conditions in most areas of the village.

Under an ESCO project, all 1,024 points of the public lighting system were renovated with new induction lamps and high efficiency reflectors, resulting in energy saving of 70% of the baseline, cutting down the electrical consumption of 740,000 kWh to 218,000 kWh per year. Additional benefits include the significant improvement of lighting quality that meets European regulations, combined with environmental sustainability. Furthermore, the ESCO project created local employment because a local installer and maintenance company were contracted for the implementation of the project. The ESCO contract is worth €1,050,000 and is concluded for 10 years. It includes energy management control system and maintenance of the installations.

The round of technical consultations held in Egypt at the end of October 2104 confirmed the real and urgent need to upgrade the PV standard framework of the Country. This is due to the expected rapid expansion of the market once the feed-in tariff will be operational, as recently announced. The second WP5 pillar activity – technical training – will be focused on vocational training. ENEA will provide its experience and its infrastructures (i.e. e-learning platform) to set up a course for trainers on PV according to European standards.The course will be held in Alexandria in spring 2015.

The fifth MED-DESIRE Technical & Scientific Committee meeting took place in Seville-Spain on Wednesday, 12 November 2014, just before the first International Capitalization event of the project. The meeting was organized by the Andalusia Energy Agency (AAE), with the support of the Coordinator Puglia Region and its agency ARTI, and involved all the nine partners.

On October 8-10 MED-DESIRE was presented by Enea as a case study in SMART ENERGY EXPO, one of the most important exhibition in Italy focused to solutions, products and technologies for energy efficiency. A space devoted to the project has been set up at the ENEA exhibition area in order to promote project activities, enhancing contacts and exchange of knowledge and information with national and international high-competence networks consisting of companies, financial operators, scientific experts and institutional representatives.

The Andalusian Energy Agency has taken part in the Fifth Forum of Greencities & Sustainability, dedicated this year to Intelligence applied to Urban Sustainability. The Agency has participated with the presentations “Innovation in Energy Planning” and “Tools, Plans and Strategies for the Promotion of Coordinated Actions to Improve Energy Efficiency”, the second together with the Institute for Energy Saving and Diversification (IDAE) and the Andalusian Smart City Cluster. The Agency has also formed part of the Round Table “Mobility in the City of the Future” and has been present, together with the other two Andalusian partners of the project: Andalusian Institute of Technology – IAT and CIEMAT – PSA, with an informative stand promoting the European project ENPI MED DESIRE. The project was also presented at “Aula Green Cities” by IAT, where success stories, good practices and innovation and research experiences were shared among the participants in the fair.

150 international experts, market actors, entrepreneurs and professionals of the energy sector have attended the International Conference “New markets, new challenges for Renewable Energy and Energy Efficiency in the Mediterranean Region”, held last 13th November in Seville. The conference, organized by the Andalusian Energy Agency, is the first capitalization event of the MED-DESIRE project – MEDiterranean DEvelopment of Support schemes for solar Initiatives and Renewable Energies. The meeting was the opportunity to exchange experiences and analyze current situation of renewable energies in the Mediterranean Basin in order to contribute to the transfer and implementation of good practices in this field, as well as facilitate, in particular, the take-up of distributed solar energy.

On November 27 MED-DESIRE took part to the 1st Mediterranean Solar Forum organized by ASCAME in Barcelona in the framework of the VIII edition of the Mediterranean Week of Economic Leaders. This year the Forum focused on Green Economy but also on social impact, training, policy impact and challenges in the solar sector. On behalf of MED-DESIRE project Juan Pablo Jimenez, project technical coordinator at IAT (Andalusian Institute of Technology), took part to the session on Regional Cooperation for the Promotion of the Solar Sector with the other ENPI CBC Med Solar Cluster projects.

On November 27 MED-DESIRE was presented at the Winter School on EU funds for energy efficiency and renewable energies organized by the Italian Ministry of Environment (MATTM) in Naples at the Federico II University in the framework of the Programme POI Renewable Energies and Energy Saving 2007-2013. Mr Giuseppe Creanza from ARTI/Puglia Region explained the main objective and expected results of the project, focusing its intervention on the Puglia Region experience in the cross-border cooperation with the MPCs

On November 15th 2014, MED-DESIRE project participated in a student orientation event at Saint Joseph University (ESIB). The event was organized by Saints-Coeurs Schools (SSCC) and aimed at informing students of 11th grade about different engineering domains. The team of the LCEC/MED-DESIRE project introduced the student to different measures, standards and strategies that help conserving energy, using resources efficiently and benefiting from renewable energy.

On November 10th 2014, MED-DESIRE project participated in the Job and Orientation Fair 2014 at the Chamber of Commerce (Saida – South Lebanon). The event was divided into three main parts: press conference, job fair and a roundtable about enumerating different soft and hard skills that are required or provided within each field of the three tackled fields: renewable energies and energy efficiency, lift and escalator systems and conventional and backup power generation.

In 31 October 2014, a meeting was held at the Industrial Research Institute (IRI) in Hadath, Lebanon aiming to coordinate awareness raising and training activities between ENPI CBC MED Solar Energy Projects in Lebanon. The meeting was attended by representatives of SHAAMS, MED-SOLAR, MED-DESIRE and FOSTEr in MED.
The participants presented the planned activities in each of the projects, discussed similarities and investigated cooperation potential.

CIEMAT (Centro de Investigaciones Energéticas Medioambientales y Tecnológicas) is a Spanish Public Research Institution owned by the Ministry of Economy and Competitiveness. Since its founding in 1951, it has developed and led R+D projects in the fields of Energy, Environment and Technology, placing the institution at the forefront of science and technology.
Its activities include the promotion, introduction and improvement of renewable energies on the energy market, as well as promotion of technology transfer, training and scientific outreach. With 1342 employees, 57% graduated, CIEMAT has a wide presence at international scientific and technical forums. In addition to the head offices and laboratories located in Madrid, CIEMAT owns several research centres in Spain.
The Plataforma Solar de Almería (PSA) is one of these outlying centres located in Southern Spain, it is formally considered as European Large Scientific Installation and is also the largest R+D centre in the World devoted to solar thermal concentrating systems. PSA is also Singular Science and Technology Infrastructures (ICTS)of Spain.

The good solar conditions, its diverse solar facilities and the highly-skilled PSA staff, provide a unique infrastructure for R+D on solar energy applications.

In September 20, 2014 H.E. Minister of Electricity and Renewable Energy announced the Feed-in Tariff (FiT) for both wind energy projects and solar Photovoltaic, PV, applications. The announced FiT is expected to open the door to disseminate both wind and PV technologies in different sectors, such as residential and commercial. Project’s scale varies from small-scale to large-scale, too. Such step will help Egypt to face the increasing demand on energy.
The target is to erect 4300 MW from both wind and PV during two years through FiT scheme. Wind will share with 2000 MW, meanwhile PV will participate with the remaining portion. The implementation plan relays on the role of the private sector. Power purchase agreements will be valid for 20 and 25 years for both wind and PV, respectively.
By the way, renewable energy targets in Egypt are: generate 20% of electricity from renewable energy sources by the year 2020 and to install 3500 MW from solar technologies. 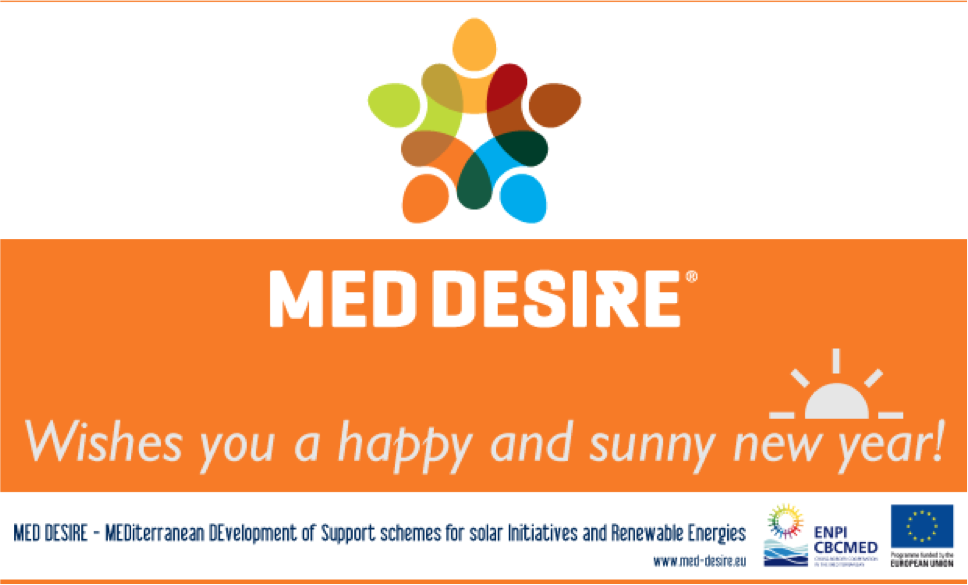 This is the fifth MED-DESIRE quarterly newsletter. If you don't want to receive MED-DESIRE newsletters anymore, please reply to this email writing 'unsubscribe' in the subject line.