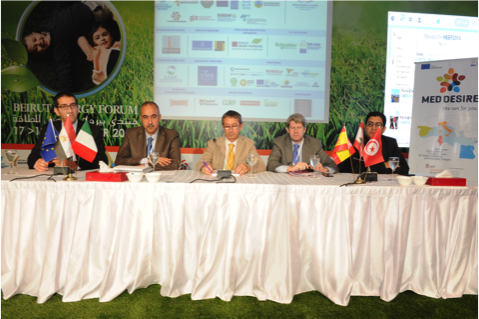 The sustainable energy market in Lebanon is growing at a fast pace. Both energy efficiency and renewable energy projects and initiatives are taking place in the different sectors of the economy. Solar energy in particular is growing at an impressive rate, creating thus a real and serious need to monitor the quality of products and installers, as well as putting in place the right mechanisms and regulations to keep the market moving in a sustainable way. Here comes the important role that the MED-DESIRE project is playing in the Lebanese market.
Through this impressive network of partnerships from institutions and technical bodies from the two shores of the Mediterranean, the interactions among the nine partners of the MED-DESIRE are allowing a rich and smooth flow of information and practices to develop the solar energy sector in Lebanon.
Being the representative of Lebanon in the MED-DESIRE project, the LCEC is keen to benefit from the opportunities that the MED-DESIRE project is offering in terms of developing renewable energy in the country. 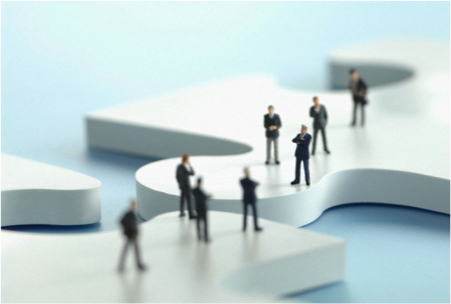 Med Desire has launched a wide survey to summarize success factors and recommendations to guide the development of effectively operating SOs in the Local or Central Authorities belonging to the countries project partners. Several SOs (known also as "Ordinances", the legal provisions requiring the installation of solar systems to cover a fraction of new or renovated buildings' energy demand) have been deeply analysed and compared worldwide.
15 SOs, collecting experiences from all over the world, have been thus analysed and reported.

Download Survey on Solar obligations (SO) and the "World Map"

After the first successful experience carried out in Egypt - the certified course for trainers of PV installers and the workshop addressed to national stakeholders - the pilot action of the MED DESIRE capacity building programme is going to be completed in Lebanon. Next course for trainers of solar photovoltaic system installers will take place in Tunisia, in the month of October 2015.
Moreover, the study visit of the Lebanese experts to ENEA testing laboratories (28 Sep -1 Oct 2015) will conclude the cooperation action with Mediterranean partner countries aimed at improving knowledge on quality test standards and procedures for solar systems, implemented in the EU. The Egyptian and Tunisian group of experts participated in the intensive study tour carried out at ENEA labs in February 2015.
All activities will be accomplished within November 2015 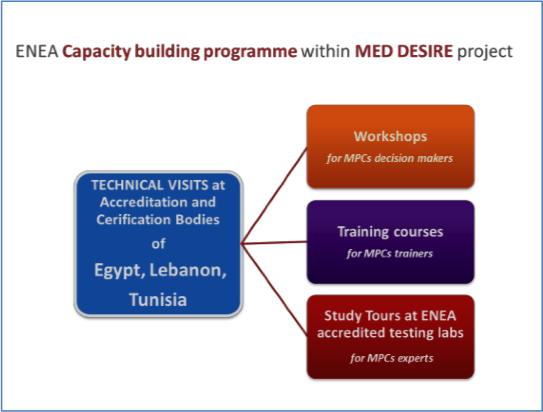 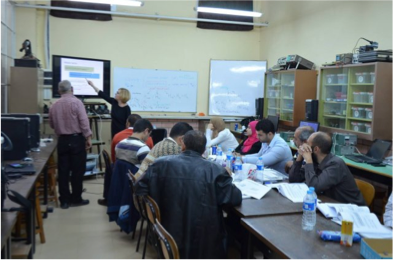 Within the framework of MED-Desire project, NREA already implemented two successful training courses in co-operation with both ENEA and Milano PolyTechnic. The first training course targeted Photovoltaic, PV, system installers at the Centre for professional education 'institute of Don Bosco" in Alexandria from 19-23 April 2015. The second capacity building program has been held in Don Bosco at Alexandria, too, during 12-13 of May and it targeted SWHs installers. 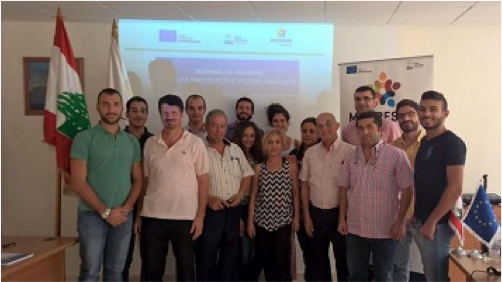 Within MED-DESIRE project specific capacity building actions have been planned concerning certification/qualification schemes of training courses also in Lebanon.
The ongoing, certified course for Training of trainers of solar photovoltaic system installers in Beirut (24-28 August) is a pilot action carried out by the Italian partner ENEA, in collaboration with the Lebanese Center for Energy Conservation (LCEC) and the Industrial Research Institute (IRI). The training is aimed at the formation of knowledge, abilities and skills relevant to the implementation, verification, management and maintenance of photovoltaic systems and subsequent verification of knowledge, skills and competencies relevant to the activity of the installer of photovoltaic systems. 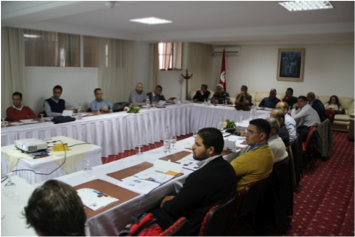 In the framework of WP5, a two-day training course on solar cooling was held at Hammam Sousse, on April 20th and 21st, 2015.
This course, ensured by Politecnico di Milano on behalf of IMELS, was attended by 25 participants, from public relevant stakeholders, SMEs, consulting firms and control office.
Several topics related to solar cooling technologies and applications were detailed during the first day, while the second day was dedicated to large scale solar thermal plants for industrial processes, a little exploited technology with a huge potential. 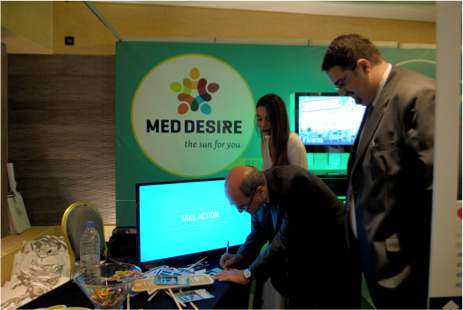 MED-DESIRE participated as a partner in the 6th edition of the Beirut Energy Forum (iBEF), that took place on the 9th, 10th and 11th of September, 2015. It is the leading energy event in Lebanon and the Arab World dedicated to energy efficiency, renewable energy and green buildings. It is held under the patronage of the Lebanese Ministry of Energy and Water.
Special awareness raising sessions by the MED-DESIRE project was held as part of the iBEF side events.
Furthermore, MED-DESIRE had several interventions in the conference. 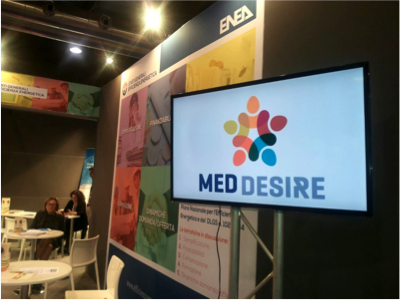 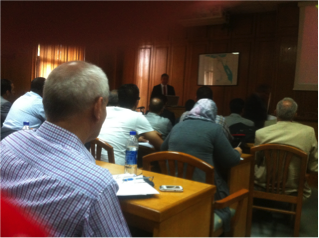 Based on mutual co-operation between New and Renewable Energy Authority, NREA, and Banque Misr, BM, an initiative to disseminate Solar Water Heaters, SWHs, in the residential sector in Egypt is under preparation. Such initiative is one of the MED-Desire outcomes, which depends on the financial mechanism study done by MED-Desire.
In this regard, NREA and BM prepared draft criteria to certify SWHs installers. To assure its suitability to the Egyptian market and ease implementation NREA hosted a public hearing on 25 August 2015 to the Egyptian Solar Water Heaters Installers. 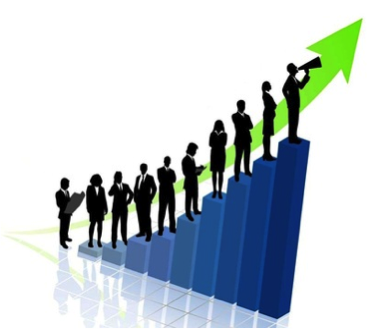 As a partner in MED-desire project, New and Renewable Energy Authority, NREA, will held a Capitalization event on October 11. The target of such event is to maximize the outcomes of MED-Desire project.
In this regard, more than 100 attendees from Italy, Spain, Lebanon, Tunisia, and Egypt are targeted. Official delegates from these countries will introduce the latest updates regarding renewable energy and energy efficiency activities.
Also, through B2B, stakeholders in both distributed solar technologies and energy efficiency will have a great opportunity to exchange their point of views and start their business. This gathering will be one of the most valuable outcomes of MED Desire project, which facilitating the market for them to foster their own business.

Save the date: National capitalization event in Tunis on October 27 "Promotional Tools for Solar Thermal and Photovoltaic Installations"

In the framework of MED-DESIRE project, the National Agency for Energy Conservation ANME is organizing in Tunis, on October 27th, 2015, a National Capitalization Event on "Promotional Tools to stimulate solar distributed technologies market".
The National event is a part of the capitalization activities of the ENPI MED project MED-DESIRE and will be arranged in two different sessions: barriers, challenges and perspective of the widespread diffusion of solar energy technologies; solar market stimulation instruments.
Click here if you want to participate http://goo.gl/forms/BBYHiGXOuu. 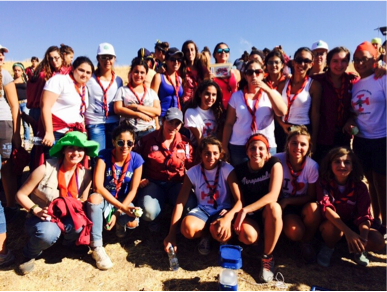 Within the MED-DESIRE project, the Lebanese Center for Energy Conservation (LCEC) organized an awareness raising event on August 22nd and 23rd, 2015 in collaboration with the Pionnières section of the Scouts du Liban.
This event, entitled "Sous un même ciel", consisted of a 2-day camp in Tannourine revolving around the conservation of and equal access to resources, including energy.
Around 500 Pionnières participated in the event that included distribution of MED-DESIRE awareness raising brochures, good deed actions within the village of Tannourine, energy conservation games and awareness raising questions.

In August 11, 2015 NREA held the awareness event "Distributed Solar Technologies and Energy Efficiency" at AASTMT premises, Alexandria, Egypt. The event was attended by representatives of different national institutions, under and post graduate students, Academia staff, non-governmental organizations and municipalities.
Activities of the campaign included presentations of the MED-DESIRE project (targets, partners, deliverables, activities), but also the current and potential role of renewable energy in Egypt. Furthermore, integrating solar ordinances in the national building code and role of civil organizations have been discussed. In addition, energy efficiency in different sectors has been presented too. 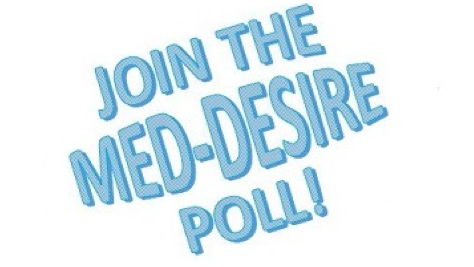 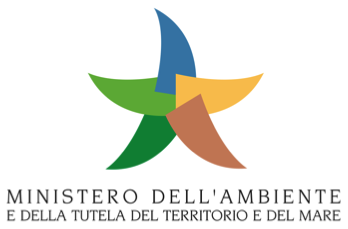 The Italian Ministry for the Environment Land and Sea is strongly committed to promoting and supporting international partnership and cooperation towards global sustainable development, mainly through its Department for Sustainable Development, Climate Change and Energy, promoting international and European agreements and cooperation projects on environmental topics, and supporting scientific researches focused on climate change adaptation and mitigation.

The Department for Sustainable Development, Climate Change and Energy has acquired a strong experience in managing cooperation and development projects by promoting many environmental cooperation initiatives in the South Mediterranean Region involving Algeria, Morocco, Israel, Tunisia and Egypt. These countries represent an important building block for dialogue among different cultures in the framework of the common goal of sustainable development.


This is the eighth MED-DESIRE quarterly newsletter. If you don't want to receive MED-DESIRE newsletters anymore, please reply to this email writing 'unsubscribe' in the subject line.