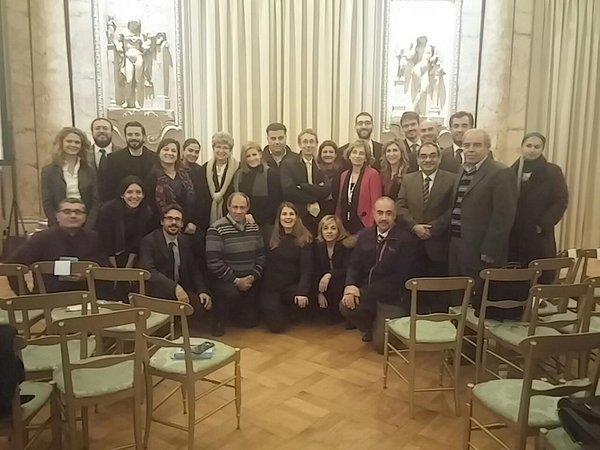 After almost three years of intense work, our MED-DESIRE project has eventually come to its conclusion. The last meeting and public event we organized in December 17 and 18 in Rome was a great success, the highly qualified audience testifying the interest raised by the project activities and results.

MED-DESIRE was a challenging and somewhat risky project, being its objectives ambitiously targeting the legislative and regulatory frameworks of our three Mediterranean Partner Countries: Egypt, Lebanon and Tunisia. Notwithstanding this, we succeeded in promoting a process of change that affected all the key project issues, like the adoption of new training curricula for solar technicians, the introduction of solar PV standards for photo-voltaic components and systems and the definition of solar building codes and of innovative financial support mechanisms for the promotion of distributed solar technologies.

I think that two elements contributed to the good performance of our project, the first being the strong involvement in the project activities of the key local stakeholders, ranging from national and local authorities and bodies, standardization organizations and certification laboratories to financial institutions and banks, municipalities and unions of municipalities, NGOs, educational institutes, energy utilities and companies, citizens and associations, also thanks to a clever and effective awareness raising and capitalization campaign.

The second and maybe most important element has been the human factor, in terms of the high professionalism of all the partners involved, the strong team spirit and the exceptional human climate we were able to create. For this, I really thank all the persons that contributed with their efforts to our common achievements. 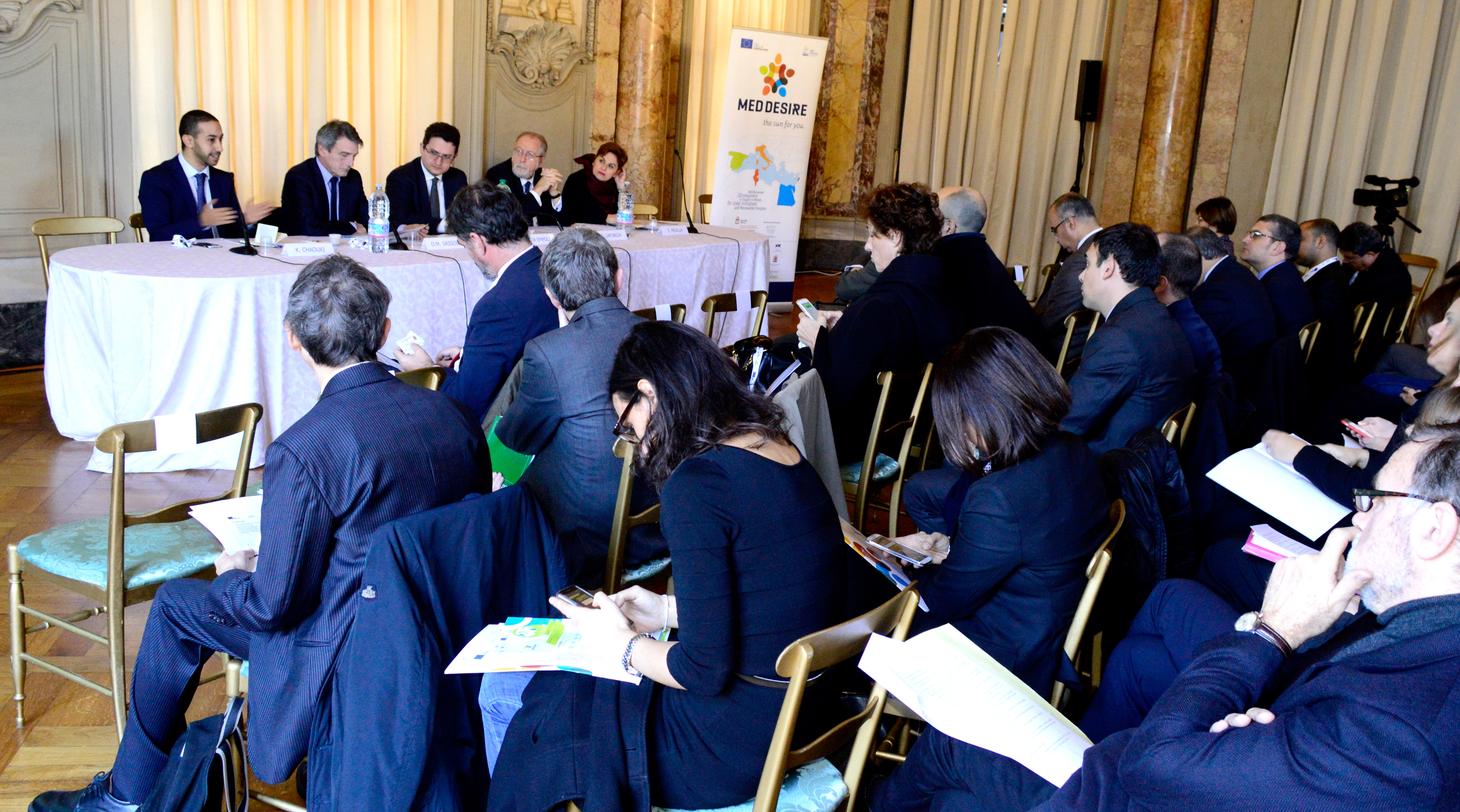 On December 18, starting from 9 am, Palazzo Colonna Coffee House in Rome (Piazza Santi Apostoli 67) hosted "The sun for you: sustainable energy for the Mediterranean", the final public event of the MED-DESIRE project, organized by Puglia Region – Department for Economic Development, Innovation, Education, Training and Employment - Industrial Research and Innovation Office (Project Leader) and ARTI, in collaboration with all project partners.

Besides showcasing the main results achieved during the lifetime of the MED-DESIRE project, the final event allowed top level representatives from national and international organizations to debate and share views on the perspectives of solar energy and energy efficiency in the Mediterranean countries. 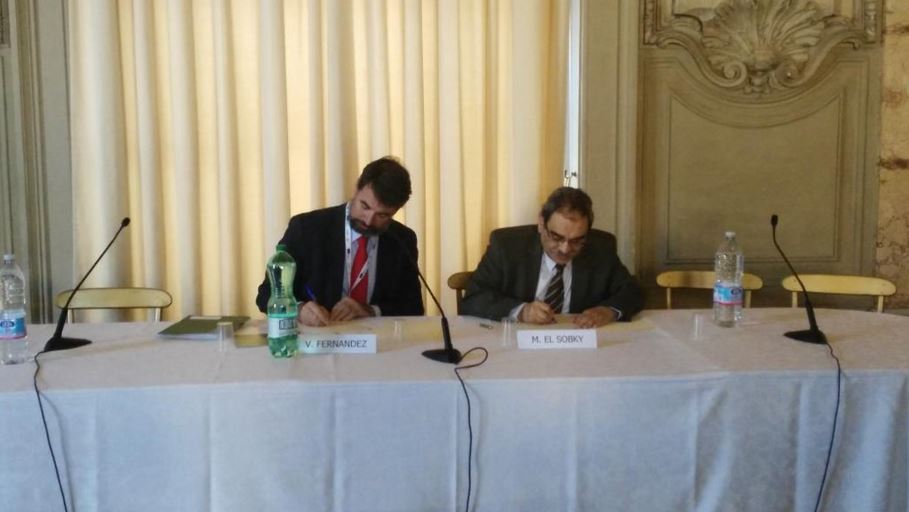 On December 18 the New and Renewable Energy Authority of Egypt (NREA) and the Andalusian Energy Agency (AAE) signed in Rome a Memorandum of Understanding which completes the close collaboration maintained during the last two years, in the framework of the MED-DESIRE project, in which both entities are partners.

Among the points identified in this collaboration include activities related to the use of joint opportunities in the energy sector in both territories and in the Mediterranean in general, as well as the cooperation between the two institutions in the development of policies and regulations that favor the development of renewable energies.

The collaboration between the signatories will also help local institutions to increase their capacities in the renewable energy area and accelerate the dissemination of their projects. In turn, cooperation with other entities of reference of the EU and European partners in the long term will provide a major boost in relation to the creation of an integrated electricity market in the Mediterranean, being beneficial to all entities involved. 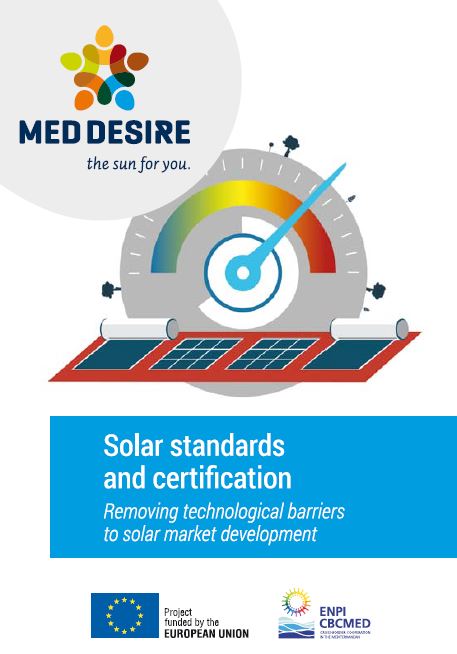 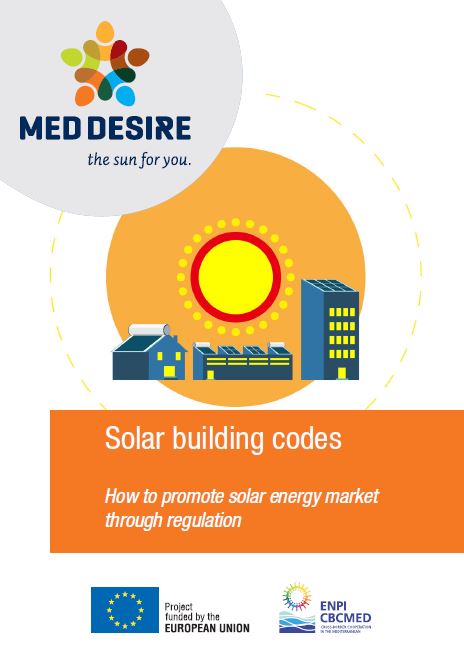 The important results achieved within the MED-DESIRE project have been collected into 3 project findings related to 3 different topics: Solar standards and Certification, Solar building codes and Innovative financing mechanisms. 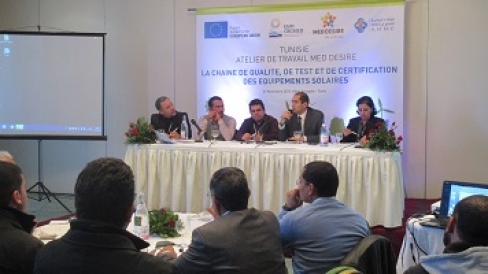 ANME organized on November 27th, 2015 in Tunis a workshop on “The quality supply chain of solar energy: Certification and Qualification”.

The event was structured into two sessions: during the first one, the General Director of the EU ENPI CBC programs explained the new ENI CBC opportunities, the ANME representative introduced the Tunisian energy context and new law of RE generation, whereas the MED-DESIRE expert gave an overview of the project and the WP5. Within the first session, national experts from national standardization body INNORPI, the solar PV testing lab CETIME and the solar thermal testing lab CTMCCV highlighted the state of the art of the certification and standardization of solar energy.

The second session was dedicated to the presentation on PV module qualification/certification scheme according to IEC standards that was insured by a MED-DESIRE expert from ENEA. 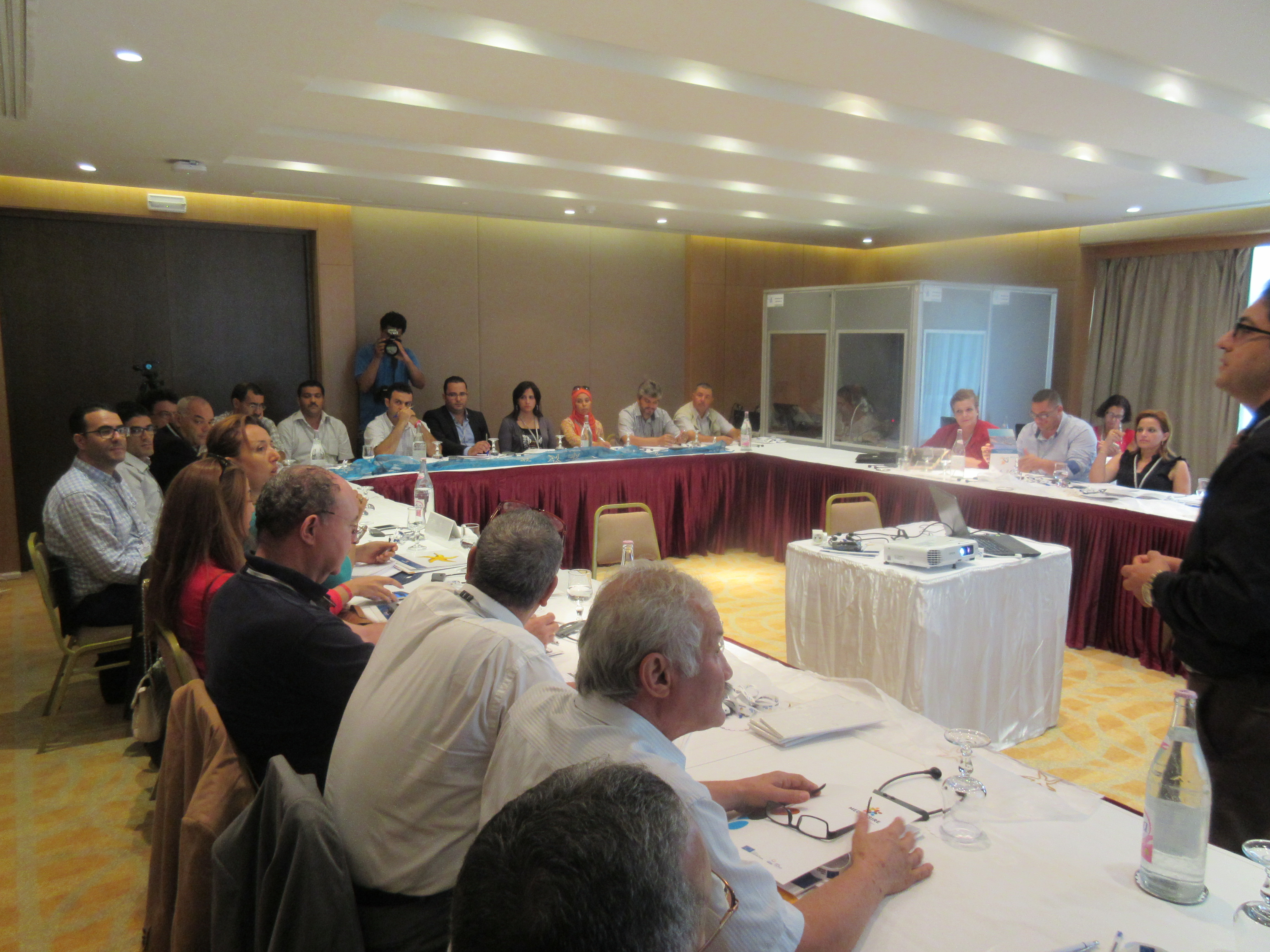 The Italian Ministry for the Environment, Land and Sea (IMELS) and Studiare Sviluppo, in collaboration with the Tunisian National Agency for Energy Conservation (ANME), the Lebanese Center for Energy Conservation (LCEC) and the Egyptian New and Renewable Energy Authority (NREA) organized 6 training sessions, in order to spread and consolidate knowledge in finance and regulation for energy efficiency and distributed solar energy technology support in the Mediterranean Partner Countries. 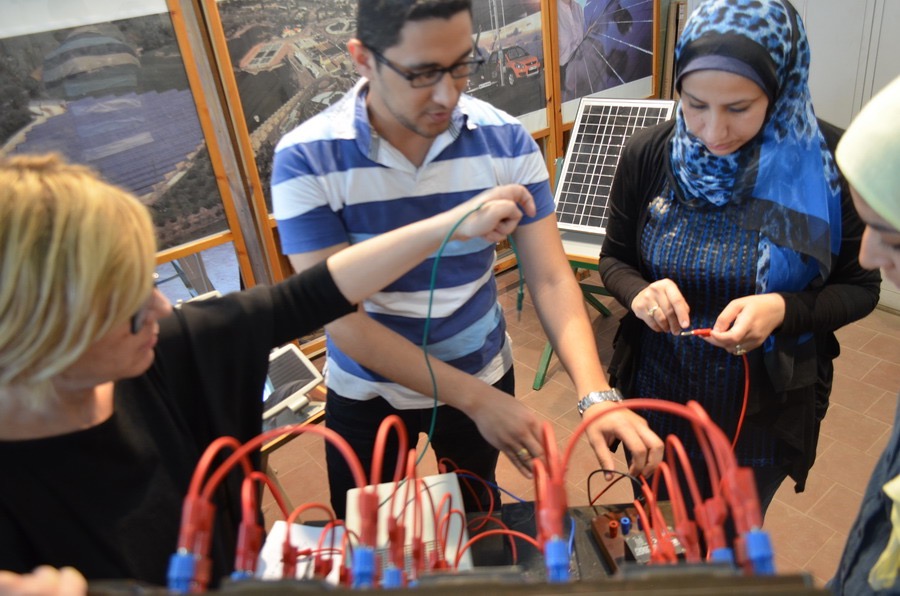 In the framework of the WP5, a capacity building programme has been successfully realized. The starting point was the identification of tools to remove the barriers that prevent distributed solar technology uptake by local markets. Thanks to the initial state of the art of solar technology in MPCs and after the results of the SWOT analysis related to this technology, ENEA and CIEMAT decided to focus the pilot capacity building on SOLAR PV. The basic idea is to guarantee high quality products and safety and well installed plants in order to boost citizens and politicians in being confident towards PV technologies.

In the second half of the project, in each partner countries a training of trainers of vocational school and experts have been organized; workshops and a technical seminar have been organized for and attended by decision makers, stakeholders and experts involved in renewable energy and PV sector. Experts and engineers have participated in an ad hoc study tour at ENEA’s accredited testing labs 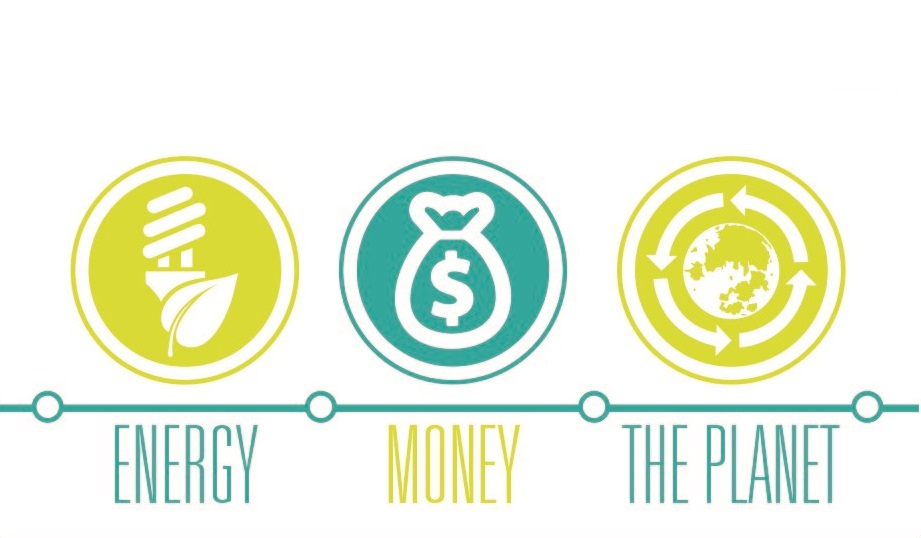 How well do you know about climate change and energy sources? Watch the infographic animation video and discover tips about energy saving, how to make your daily actions more eco-friendly, contributing thus in significant reduction in our energy use and saving the environment. The animation video is an awareness raising video targeting people of all ages, and social classes. The video, realized by the Lebanese Center for Energy Conservation – LCEC, has been released in two languages, English and Arabic. 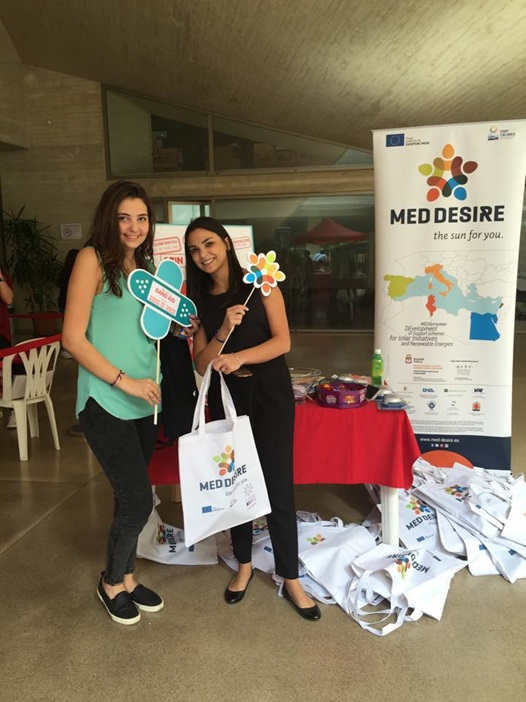 In the last months of the project, LCEC continued to promote awareness raising activities related to MED-DESIRE, in order to reach a wider range of audience and maximize the benefits of the project. As such, LCEC collaborated with “RadioOne” for a one-whole-month awareness program through the social networking site “Instagram”. LCEC prepared a set of multiple-choice questions about renewable energy and energy efficiency and each day one question was posted on the RadioOne Instagram @Radioone.fm.

LCEC also collaborated with Donner Sang Compter that organized several blood drives in several universities. The first event was on November 4, 2015 from 9:00 am to 3:00 pm at the University of Saint Joseph (USJ) whereas the second one was at the Notre-Dame University (NDU) on November 28 from 9:00am to 3:00 pm. 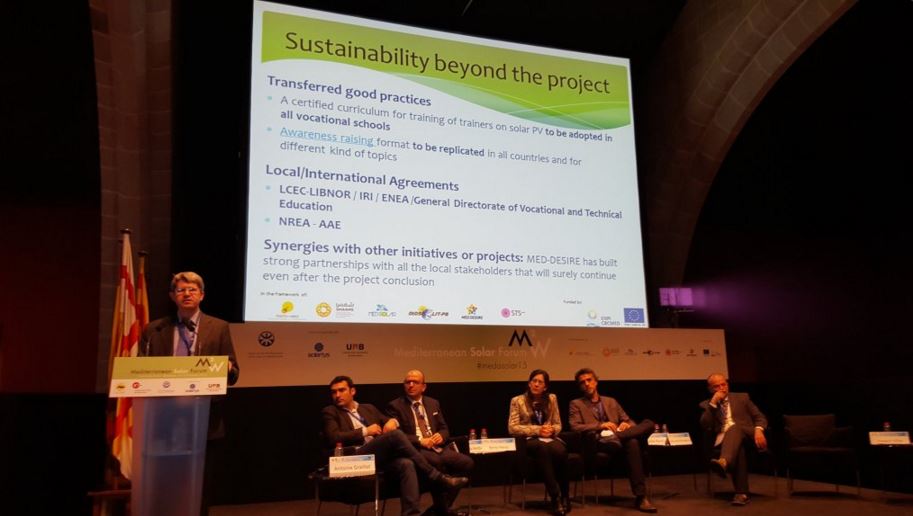 Last 26 November 2015 the II Mediterranean Solar Forum, in the framework of the Mediterranean Economic Leaders Week, was held in Barcelona, Spain. The objective of this forum was the joint reflection among government representatives, international organizations, project developers and private investors on the challenges and opportunities that solar energy represents in the Mediterranean, given its strategic importance of the resource.

During the second session, that was dedicated to the presentation of the six projects on the energy field funded by the ENPI CBC MED Programme, the Andalusian Energy Agency presented MED-DESIRE project results and achievement. 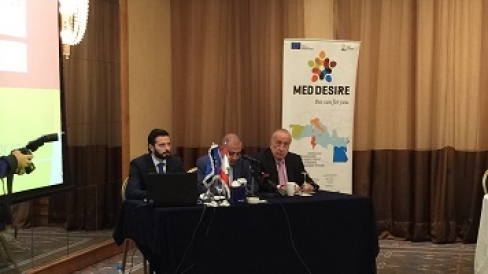 Within the MED-DESIRE project, the Lebanese Center for Energy Conservation (LCEC) hosted a press and media event on December 2, 2015. The event “Energy experts meet the media: important renewable energy and energy efficiency topics” was an interactive workshop between energy experts from LCEC and the press and media. The event witnessed the attendance of 50 participants from journalists and editors of magazines and newspapers such as Al Safir, World Environment and Al Nahhar, to reporters from TV channels like Orbit, Al Manar and NBN and from radio stations such as the Lebanese Radio. 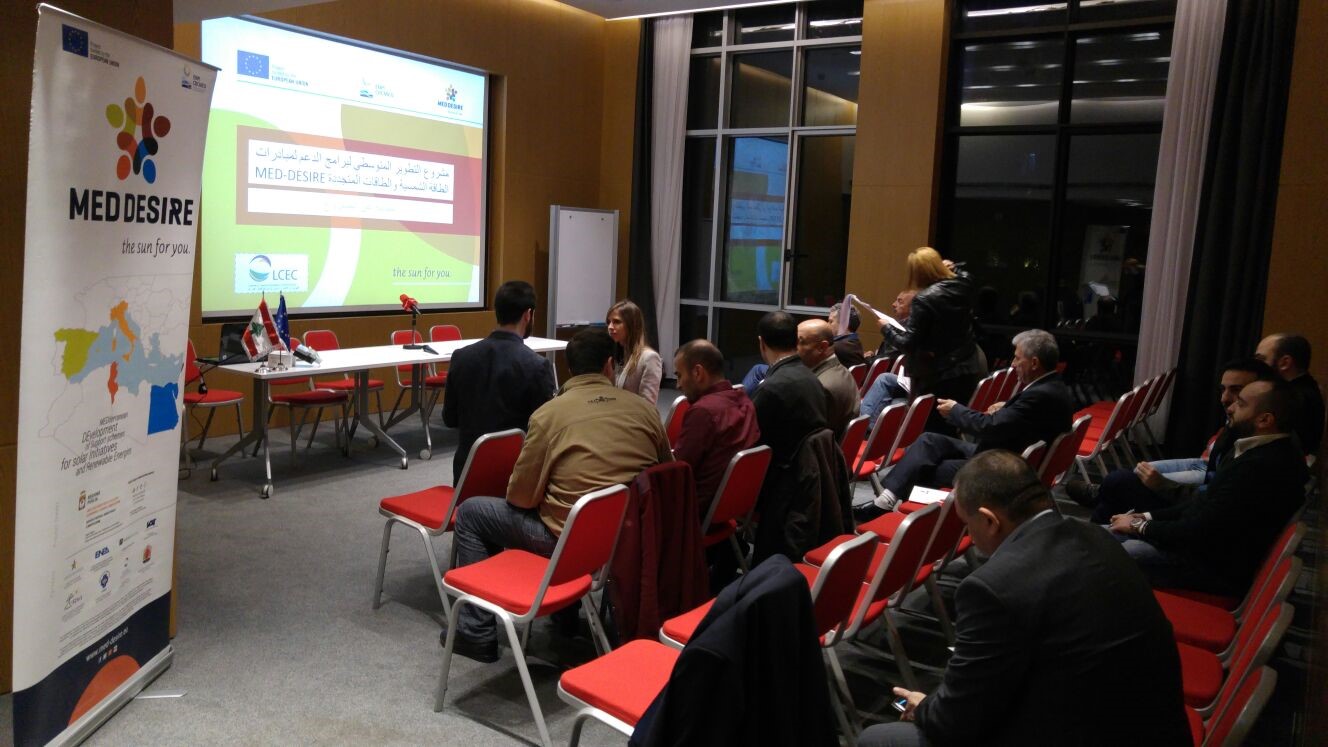 LCEC held a capitalization event on these achieved results on Thursday December 3, 2015 at Smallville Hotel, Badaro, Beirut. The event entitled “MED-DESIRE capitalization discussion towards the facilitation of Net-Metering and good quality connection to EDL” was a discussion session between solar companies and Electricité du Liban (EDL), the national electricity utility, to develop recommendations on the good quality connection of solar photovoltaic systems to the national electricity grid and on the removal of administrative barriers in the presence of 50 participants from solar companies, World Energy Congress (WEC) Lebanon Committee and United Nations Development Programme (UNDP) projects.


This is the tenth MED-DESIRE quarterly newsletter. If you don't want to receive MED-DESIRE newsletters anymore, please reply to this email writing 'unsubscribe' in the subject line.